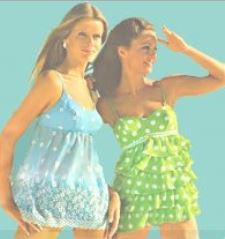 With summer weather swiftly approaching, we will soon don swimsuits and head to the public pools. You may put on swim trunks, bikinis, tankinis, one-pieces, or whatever modern swim clothes are available. There are tons of options for what to wear, from modest to revealing and flashy to muted. Swimwear hasn’t always been this diverse, though. Go back a couple tens of years and you’ll see a huge difference in how swimwear was treated and designed.

Before the 17th century, both men and women swam nude. Around 1670, people began to wear clothes to swim. The clothes were made of billowy yellow canvas, so neither women’s nor men’s figures were shown whilst swimming. Women wore “bathing gowns”, which some sewed weights to the bottom of to ensure modesty.

Men were told to wear one-pieces with short legs and arms, as swimming nude was banned in the U.K. in 1860. In natural bodies of water, men swam nude or wore their underwear. Women wore a two-piece, but it was nothing like modern-day bikinis. It consisted of a long gown and ankle-length trousers, also made of wool or flannel. Women and men were segregated when swimming during this time. To enforce complete safety from the eyes of men, women entered the ocean in “bathing machines”. These machines were wheeled horse-drawn carts which a woman would enter onshore in her everyday clothes, change into swimwear once inside, and step into the ocean once it was in the water. It blocked the view from the shore, keeping privacy intact. In the mid-1800s, “bloomer suits” became popular. They had shortened trousers and short-sleeved tunics, but women had to wear stockings and shoes as showing legs was still forbidden. 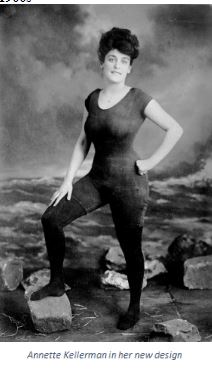 She was the first woman to try swimming across the English Channel, which led her to make a one-piece swimsuit that was form-fitting, which was more aerodynamic than previous designs.

In 1912, women’s swimming was introduced as an event in the Olympics. More functional swimsuits were needed by women becoming interested in the sport, so sleeveless shirts layered over shorts became the norm, as well as omitting the stockings that had always been part of bathing suits.

In the 20s, the term “swimming suit” rose in popularity. The shorts on women’s suits got shorter, which led to the prevalence of the “swimsuit police”. These people measured the length of women’s shorts, ensuring they were modest. If the woman’s shorts were deemed too short, she could be given a citation or even sent to jail. Man, I’m glad I wasn’t around in the 20s. Men’s suits were similar, except they weren’t policed on length. They also wore a white belt to keep the shorts up.

Women’s suits got a new fabric, invented by Lastex, which was shiny and sleek, a far cry from the wool of previous years. The neck holes and backs were lowered, the leg holes rose higher, and more colors became available, as well as striped.

Some suits even had appliques! Men got two pieces, shorts, and a top. The top had large holes to make swimming easier. Stripes were popular, and the white belt remained.

WWII called for swimsuit factories to use 10% less fabric so that it could be used for the war effort. This caused the creation of the two-piece suit, which began to come into fashion in 1946. The bikini was invented but was seen as too revealing and immodest. 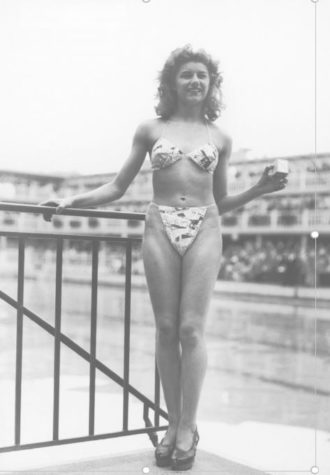 The man who invented it, Luis Reard, had trouble finding a model for it. He finally found 18-year-old nude casino dancer Micheline Bernardini. She ended up receiving over 50,000 fan letters after her bikini photo went international. In the 1940s, men began to remove their tops.

Micheline in the first bikini

Bikinis became commonplace after stars like Elizabeth Taylor and Grace Kelly were seen wearing them. In 1951, international sex symbol Marilyn Monroe was photographed in a polka dot bikini, which solidified the grip bikinis had on 50s women. Men’s suits lost the belt, being replaced with elastic bands sewn into the bottoms. Two styles were created, the briefs and the boxers. Some even had coin pockets! Cabana sets were popular, which had printed boxers and a matching shirt, usually with a Hawai’ian theme.

Bikinis with polka dots were all the rage, and fun patterns were very popular. The bottoms dropped below the navel, and multiple top styles were created. Ruffles on swimsuits also became very common.

The baby doll suit was a huge trend. The bottoms sat at the hips and a baby doll top that was usually sheer at the bottom. For the men, designer Peter Travis invented the Speedo. Bathing shorts were also made of different fabrics, like denim and corduroy. They also often had crazy psychedelic patterns on them.

In 1974, nude sunbathing was banned in California. To combat this, Rudi Gernreich created the thong bikini bottom. The women’s liberation movements of the 70s increased the popularity of much more skimpy suits. Sport shorts became popular for men, short shorts with tulip-style legs and often a stripe along the side and hem. Straight-leg shorts with pockets were also popular.

Women’s necklines began to plunge even more and leg cutouts rose. The signature style of the 80s? Loud. Bright, bold patterns, neon colors, animal prints, and color blocking were all the rage. Mixing and matching bikini tops and bottoms was also popular. New fabrics were implemented, some of which had sun protection or rash guards. Men wore boxer-short style trunks with bright colors and prints, and the Speedo bottom had a resurgence.

One-pieces with very high leg cutouts were popular for women, as well as cutouts, plastic panels, bikini bottoms with ties, and suits made of shiny fabrics. Surf culture was rising in popularity, leading to an increase in men wearing loose-fitting and long shorts.

The 2000s saw a lot of advances in competitive swimwear technology. For recreational suits, women wore bikinis with halter tops and fun patterns like hearts and stars. Men wore boardshorts, tropical prints, and colors like blue and grey.

Swimwear has changed dramatically throughout the years. It has gone from being a staple for modesty to a staple for fashion. One thing is certain, though. I’m sure we’re all glad that “bathing machines” are a thing of the past!